Richard Thorneycroft – The View From Provence

We miss Richard Thorneycroft. Richard first came to Heatherleys as a student on the Portrait Diploma and went on to become our Marketing Manager. Eventually he left the school to set up home and studio in France.

Here he gives us an insight into his new life:

‘The weather has turned and the crocuses have flowered, the spring bulbs have been planted and thoughts now turn to storing wood for next winter. Today I will be filling the large crack that has appeared in our bedroom wall. I can actually see the garden through it…
Despite winters cold, the lack of insulation, the crack in the wall and the fact that overnight the fat cat ate half a saussice aux noix, this is possibly my favourite time of year in Provence. The angle of the sun casts a new light on everything you see. The trees that dropped all their leaves during the winter are beginning to bud and the morning frosts colour the mountain and fields in powdered blues and violets and we start thinking about taking trips down to the Calanques before the tourists pour in.

If you had been transported from July to February in the wave of a magician’s baguette, you might not recognise the place. During the summer if you drive between Cavaillon and St Remy de Provence along the long straight Route D’Orgon, you’ll see that the road is lined with plane trees on either side whose large leaves form a lush green canopy for miles and miles. In the winter when all the leaves have fallen, the branches reach up and intertwine in thousands of silvery fingers, creating fanned vaults like the ceiling of the chapel of King’s College, Cambridge. If there were an organ at the end of the road, it would knock the socks off any cathedral in the world. Add to the scenery the whiff of wood smoke and burning leaves in the cold air, the Marchés, the Vin chaud, chestnuts roasting on open oil half barrels… This is an eventful and plentiful time of the year, so what more could you wish for? Well, it turns out that even though we are slap bang in the middle of a region famous for its cuisine and beautiful landscapes, there a certain things we miss about the old country. We remember fondly visits to Emmet’s of Peasenhall, the pork scratchings from the Butcher’s in Monmouth, the cheeses from Paxton and Whitfield, Cheddar, Stilton, Sherry freely available from any supermarket, a leisurely pint of Ale at the Nelson in Southwold, walks through Fulham Palace gardens, Gingerbread Latte from Costa on the North End Road. London, Friends, Family. It may sound like I’ve chosen the wrong country to live in, but the really great thing about living here in France is the greater appreciation we have for all the things that we couldn’t fit into the removals van, the people and places we left behind and knowing what’s in store for us back ‘home’.

Being an artist here is hard work. Every gallery seems to be owned by the artist whose own work is displayed so other than your local Office de Tourisme there is little opportunity to show your work to your compatriots. The famous French beurocracy is enough to make you drink yourself into oblivion with Beaujolais nouveau. Painting plays second fiddle to filling in forms, asking for official documents to be sent from the UK at great expense, trying to remain calm when application forms keep being sent back asking for information you’ve already given…

But, despite all this I do paint and even though trying to make a living here feels like trying to shout at the Mistral to make it go away, painting is what I must do.
Being a student at Heatherley’s taught me so much more than just putting paint on canvas, it taught me about committing, obsessing, really seeing, really understanding, appreciating and above all, when it’s all going pear-shaped, to persist.’ 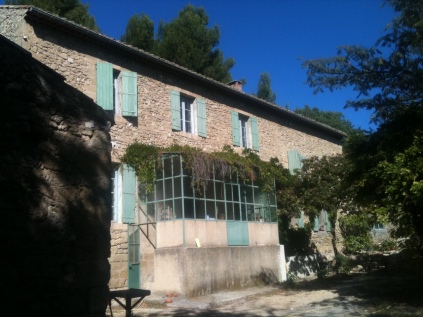 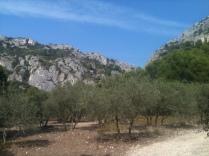 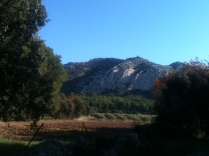 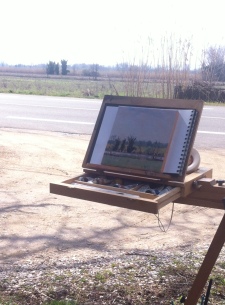 To learn more have a look at Richard’s blog: http://awanderingartisteye.blogspot.co.uk

Heatherley's blog on art, artists and life in an art school
View all posts by heatherleys →
This entry was posted in Uncategorized. Bookmark the permalink.

4 Responses to Richard Thorneycroft – The View From Provence