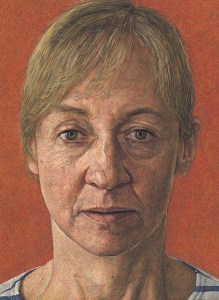 Antony Williams studied initially at Farnham (Northwest Surrey College of Art) on a Foundation Course in 1984, and went on to Portsmouth University (then Polytechnic) to do a BA in Fine Art . He then started working part time for a picture conservator in Walton on Thames, who introduced Williams to the medium of egg tempera.

In 1989 Williams studied for a year on an illustration course in Cambridge. After leaving Cambridge he started attending life classes, and engaging more seriously with working from observation. In 1991 he won the Carroll Foundation Award at the Royal Society of Portrait Painters, and in 1995 at the RP again the Ondaatje Prize – a commission to paint HM Queen Elizabeth 11 . Other prizes include the Lynne Painter Stainers Prize 2012, and The Prince of Wales’s Prize for a Portrait Drawing 2014 .

He was elected to the RP in 1996, NEAC in 2007 and the Pastel Society in 2007. His first solo show was in 1997 at the Albemarle Gallery, and he has had a number of shows since then with Messums in Cork st, and also shows in Madrid and Barcelona. He has undertaken commissions for the House of Commons, The Royal Collection, House of Commons and the MCC.

In this talk Williams plans to cover his early years; his art education, and then working for the picture restorer who introduced him to egg tempera, and the period when he started approaching galleries and entering art competitions which led onto the portrait commissions and solo exhibitions.

He will discuss the medium of egg tempera; why he chose to use it almost exclusively and how it affects his practice. He will also talk about his engagement with working from observation, and interest and focus on portraiture and figurative painting.

This event is free and open to the public but seating is limited and will be allocated on a first come first served basis.

Heatherley's blog on art, artists and life in an art school
View all posts by heatherleys →
This entry was posted in Uncategorized. Bookmark the permalink.